Our staff and invited guests introduce their favourite documents from the Bristol Archives collections. For this edition, Matt Coles, Archives Assistant has chosen a plan of bombs dropped, ranging from 50 kilos to 1,000 kilos, during the 1939-45 war.

This plan was produced in May 1960 and forms part of the Civil Defence Committee collection at Bristol Archives.

Along with a plan of unexploded bombs in the same collection (RefNo. 33779/7), it provides a telling visual realisation as to the extent of the bombing sustained by Bristol during the Second World War.

The maps can also be cross-referenced with the Jim Facey collection of photographs from the war (RefNo. 41969), which includes many startling images of the devastation wrought by the bombing raids. These images are available to view on the media computer in our searchroom.

Bombing maps can also be used to help understand the nature of the city’s extensive post-war redevelopment.

A good way of seeing the lasting impact of the bombing is to use Bristol City Council’s Know Your Place website. This includes a map of the bombs dropped during the last major attack, the Good Friday raid of 1941.

You can also use the site to overlay modern aerial maps over from the pre- and post-war periods to see how certain areas have evolved, notably heavily damaged parts of the city such as Castle Park and Broadmead.

The reference number for this document is 33779/8.

2 comments on “Desert Island Doc: Mapping the bombardment of Bristol” 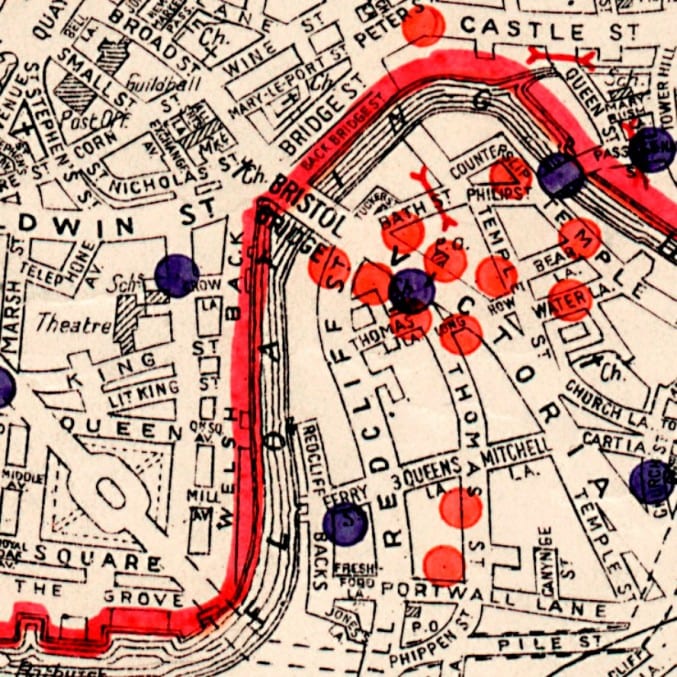