Our staff and invited guests introduce their favourite documents from the Bristol Archives collections. For this edition, Allie Dillon, Senior Archivist (Public Services) has chosen a bill of fare at J Weeks’s Bush Tavern, Corn Street, for Christmas 1790.

John Weeks, landlord of the Bush Tavern, was known as a generous host and the menu for his Christmas table testifies to that.

This vast bill of fare lists almost 140 dishes, mostly fish, fowl and cuts of meat. These include an entire roasting pig, meat from ten deer and more unusual items such as turtle and reindeer tongue. The list also contains many unfamiliar terms, such as ‘veal burr’ (veal sweetbreads), ‘pork griskin’ (lean pork loin) and ‘stares’ (starlings).

Items are described in odd quantities – such as ‘470 minced pies, 13 tarts’ – which suggests that the list was printed at short notice, once the foods available for Christmas were known. The Bush Tavern was for many years Bristol’s leading coaching inn. Weeks was landlord from around 1775 to 1801 and he is commemorated in a memorial tablet in Bristol Cathedral. The tavern was later made famous by Charles Dickens, who used it as a setting in ‘The Pickwick Papers’ after visiting in 1835.

The inn existed until the mid nineteenth century and the site on Corn Street is now occupied
by Lloyd’s Bank. 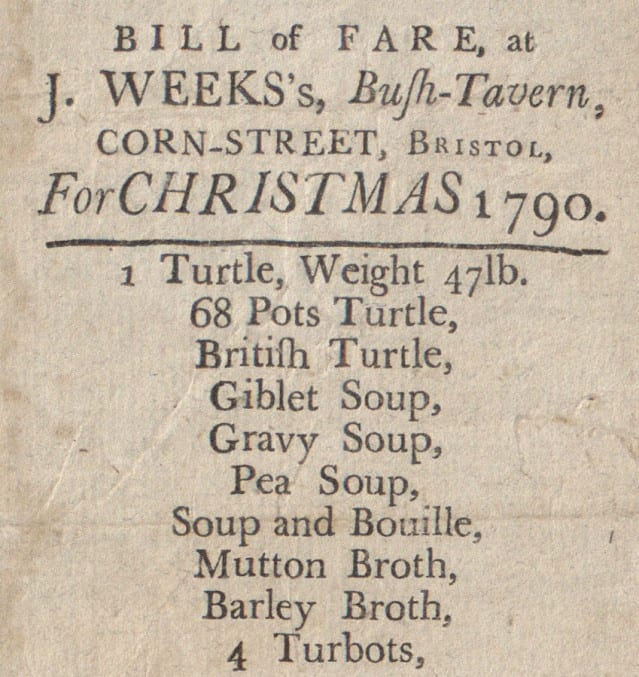