Muffin the Mule ran on BBC from 1946 until 1955. He became a television star and a wide range of merchandise was made using the Muffin character, including books, records, games and toys.

A die-cast movable puppet became the first toy to be marketed under licence as a result of successful TV appearances. Gordon’s famous leather jacket was a gift from Adam Ant, who made and decorated the jacket himself.

According to Schofield, Gordon has battled alcoholism (his favourite was Catcus Juice Champagne) and is regularly in and out of rehab. There was a shortage of Tracy Island playsets in the run-up to Christmas in 1992 so Blue Peter responded by demonstrating how to build a home-made version.

The BBC was then overwhelmed by viewers’ requests for copies of an instruction sheet for making the model. There was a deliberate space in the theme tune for viewers to shout out whatever day of the week it was. The Flower Pot Men was originally aired on Watch with Mother in 1952.

They spoke their own version of English, called Oddle Poddle, which was invented by the same man who voiced the Daleks and Captain Pugwash. Their language was criticised for hindering children from learning proper English. Teletubbies began in 1997. Filming would only take place in sunshine with a blue sky.

In 1999, an American cleric alleged that Tinky Winky was a gay role model for children. He based this theory on the character’s purple color, his triangular antenna and his handbag. Button Moon was broadcast from 1980. It featured the adventures of Mr. Spoon who travelled across Blanket Sky to Button Moon in his homemade rocket ship each episode.

All the characters were based on kitchen utensils, as were many of the props. Mr Spoon’s rocket ship was made from a Baked Beans can.

The Story of Children’s Television from 1946 to Today runs from 2 July until 25 September at M Shed. Tickets can be purchased in advance on our website. 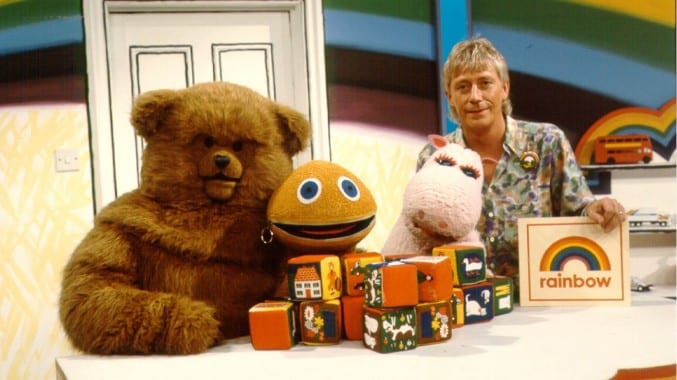