Did you know that Bristol Museum & Art Gallery has 300 Japanese carvings known as netsuke and okimono? 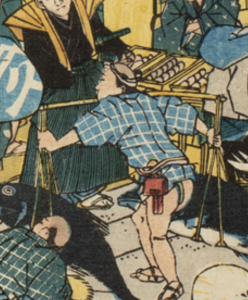 Netsuke were Japan’s solution to a lack of pockets in men’s kimono and other clothing. During the Edo Period (1603-1868), men would hang small personal items on woven silk cords and tuck them into their sashes at the waist. Netsuke acted as toggles to stop the suspended objects from slipping.

When western clothing with pockets became increasingly fashionable in the Meiji Period (1868-1912), there was a declining demand for netsuke. Carvers turned their skills toward making intricate ornamental carvings called okimono. As purely decorative items, okimono usually have more delicate parts and are slightly larger than netsuke.

Both netsuke and okimono offer a fascinating glimpse into popular Japanese culture. They are great expressions of the personalities of the craftsmen who made them and the people who used them.

We’ve picked ten favourites to give you a flavour of the collection. 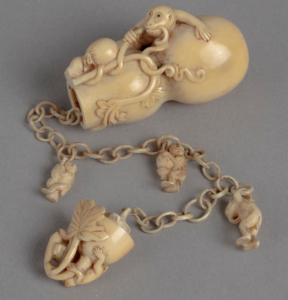 I start this list with the most intricately carved netsuke in the collection. It shows a smiling monkey clinging to a gourd and biting a vine.

The top of the gourd pulls apart to reveal an interlinking chain to which three monkeys cling. Believe it or not, the gourd, chain and monkeys are carved from a single piece of ivory.

It is a great demonstration of the craftsman’s skill and patience. 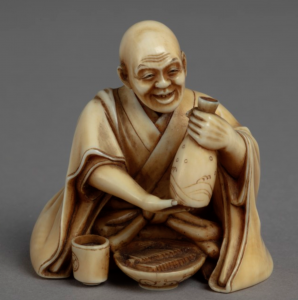 Second on my list is this humorous carving of a man drinking sake, rice wine.

The seated man holds up a flask as though he is about to offer you some, or perhaps he is helping himself to some more!

The best thing about this piece is that his head wobbles when you pick him up, giving him the appearance of having had one too many drinks. 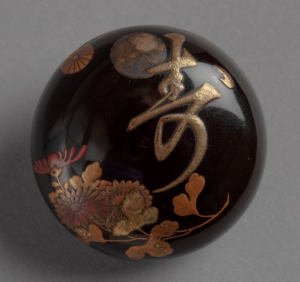 This beautiful lacquer netsuke is adorned with gilded chrysanthemums and flowers. It opens up and could have been used to store medicine or tinder for lighting a fire.

The writing reads kotobuki, and can mean ‘congratulations’, ‘best wishes’, or ‘long life’.

I wonder which meaning the word had to the person who used it. Perhaps it was once a gift? 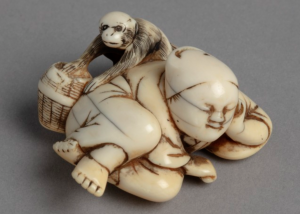 I get the sense that this netsuke was well loved by its owner. The worn and rounded surface gives the impression that it was once well used.

It shows a monkey trainer sleeping serenely, his usually obedient monkey stealing food behind his back.

This tongue-in-cheek humour is characteristic of Edo period popular culture. 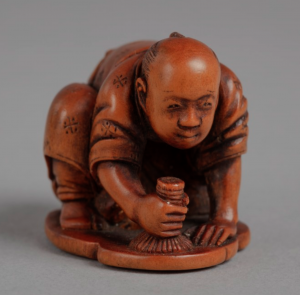 This netsuke was a fun one to research. It shows a man on his hands and knees, but it took me a while to figure out what he is doing. Is he holding a brush?

Is he doing calligraphy? Looking at it from various angles, it clicked – the swirling pattern of the underside forms the word kokoro, the Japanese word for mind, heart, or spirit.

This little fella is polishing his mind! 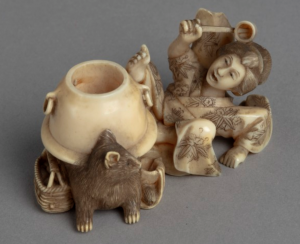 I love how expressive the carvings can be, and this is a great example.

This okimono refers to the story of The Lucky Tea Kettle, a tale of a badger-kettle that brings great fortune to the rag picker who looks after it.

This okimono shows a lady stumbling backwards in alarm as the kettle transforms into a badger. You can really feel the woman’s surprise and the badger’s bewilderment. 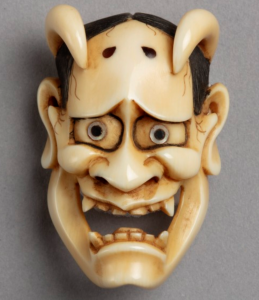 Another expressive piece is this mask netsuke of the fearsome demon Hannya.

Used in Noh and Kabuki theatre, the Hannya mask represents the face of a woman so jealous and obsessed that she takes on the features of a demon.

The captivating eyes of this netsuke are inlayed with abalone shell and gleam in the light.

I sense a melancholy and heartbreak in them. 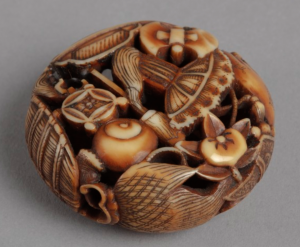 This netsuke is decorated with the Myriad Treasures.

The Myriad Treasures are items that are associated with the Seven Gods of Good Luck and are said to bring prosperity, long life and good fortune.

I marvel at how delicate this netsuke is. It is carved like lace and has a hollow centre, a style known as a ryūsa netsuke. It must have taken great skill to make. 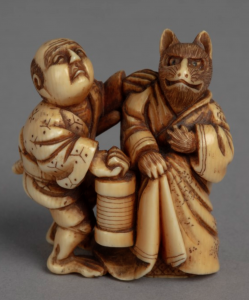 This netsuke shows a fox-woman standing beside a samurai warrior carrying a lantern.

Japanese folklore describes foxes as shape-shifting tricksters who confuse their victims with visions and illusions.

I love the expression of the samurai in this netsuke. I wonder if he has noticed the true identity of his companion. Is it too dark for him to see, or does the fox-woman have him in a trance? 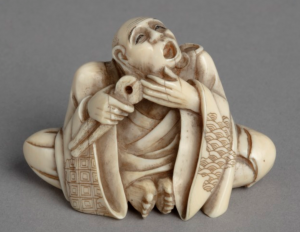 This netsuke shows a seated man holding up pliers to his mouth as if to pull out a tooth.

I find the subject rather puzzling. Why have a netsuke of a man performing dentistry? Perhaps the owner was a dentist.

Or perhaps the man depicted is a monk and the pliers refer to a saying that Lord Emma, the King of Hell, will pull out your tongue if you tell a lie.

We rely on visitor donations to help deliver the amazing work we do and our temporary closure is having a significant impact on our charitable income. We need your support now more than ever. Please consider making a donation today.

You can now see the Netsuke Exhibition Online

4 comments on “10 netsuke from Bristol’s collection” 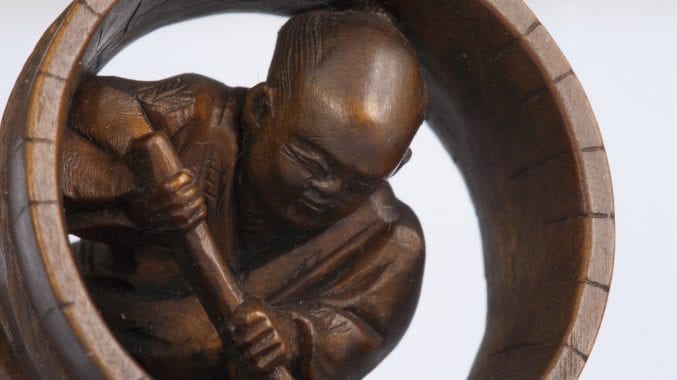