The Bristol Bus Boycott: A watershed moment for Black Britain 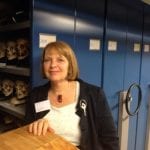 With contributions from Ros Martin and Sue Giles.

The world was changing fast following the Second World War. African Americans were beginning their long fight for civil rights, the apartheid system in South Africa was being intensified and Britain’s former colonies were pressing for independence.

Mainland Britain faced a labour shortage and looked to its Caribbean colonies (including Jamaica and Barbados) to help fill the gap. A small but growing stream of mainly young men came to Britain in the 1950s as British citizens.

There was a backlash by some white British which resulted in the Nottingham and Notting Hill race riots of 1958. Many people wanted immigration to be controlled and the Immigration Act was passed in 1962.

In Bristol in the 1950s, there were about 1,000 African-Caribbean migrants and around 3,000 by 1962. They faced racial hatred, struggled to find housing and could only find low paid jobs. They were concentrated in the inner city area of St Pauls. The area was still badly bomb-damaged following the war and it was the only place many African Caribbean people could afford to live. Many white Bristolians wrongly blamed the migrants for causing these poor conditions. Though St Pauls was still mainly white, it was popularly seen as a ‘Black’ area.

The Bristol Omnibus Company was privately-owned and its workers belonged to the Transport and General Worker’s Union. The local branch of the union passed a resolution to ban ‘coloured’ people from working as bus conductors and drivers in 1955. The company went along with the resolution and national union officers turned a blind eye to it.

The Bristol Evening Post exposed this racist policy in 1961 but company manager Ian Patey defended it. He said his hands were tied as his staff were not willing to work with ‘coloured labour’ except in the depots as maintenance workers. He argued the quality of Bristol’s Black workers was too low for the front-line jobs of drivers and conductors. He feared it was unsuitable for white bus conductresses to work with Black male drivers. Even the local council supported the policy.

What was the Bristol Boycott? Who organized, supported and opposed it?

Stephenson was Bristol’s first Black youth officer. He was born in Essex to a West African father and an English mother of mixed ancestry. Stephenson was educated, articulate and a gifted organiser.

As spokesman, Stephenson brought the company’s racist policy to public attention. He put forward a well-qualified and well-spoken young man named Guy Bailey for a vacancy as a bus conductor. He was denied an interview once the Company realised Bailey was in fact a Black Jamaican.

In response, Stephenson got the WIDC to call for a boycott of Bristol’s buses. This was in April 1963. Some students and tutors from the University of Bristol staged a demonstration in the city centre in support. They were heckled by angry busmen opposed to their protest.

The local newspapers were suddenly full of passionate letters both for and against the policy. Tempers ran high and the union that represented the bus workers publicly clashed with Stephenson. Stephenson later successfully sued for libel. Even the Bishop of Bristol – who had never actively opposed racial discrimination on the buses – accused the WIDC of being too militant. It was left to the Communist Party and Christian groups (along some with some individual left-wing and Liberal activists) to take a stronger stand. 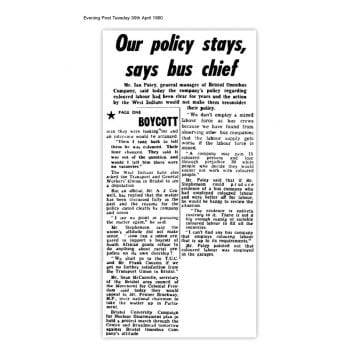 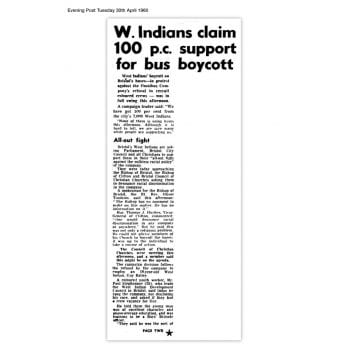 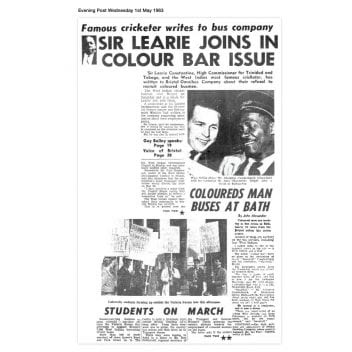 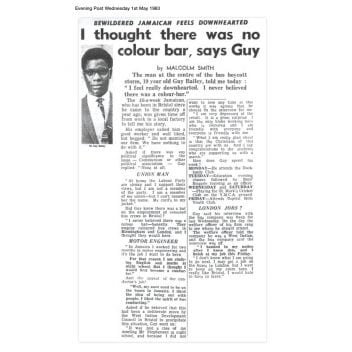 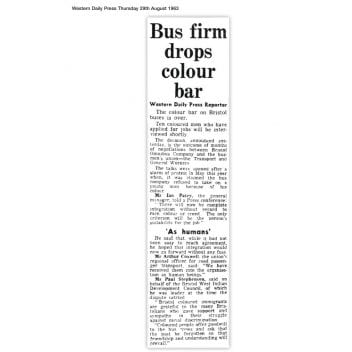 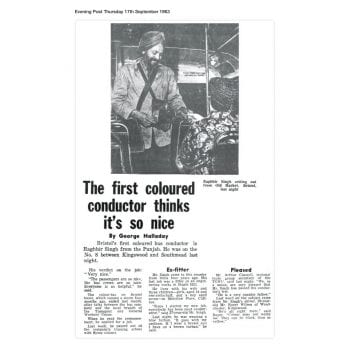 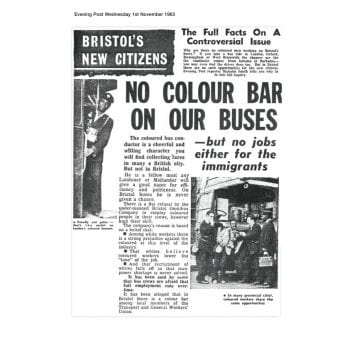 The boycott soon attracted national and international attention. An array of big names entered the fray. Prime Minister Harold Wilson, local Labour politician Tony Benn, and famous West Indian cricketer and diplomat Sir Learie Constantine all lent their support to the campaign. With pressure growing on the Bristol Omnibus Company, it was finally forced to end its ‘colour bar’ in August 1963. It was an historic victory.

A month after the company conceded, it hired Sikh graduate Raghbir Singh as Bristol’s first bus conductor of colour. He was soon joined by four other conductors: Norman Samuels and Norris Edwards from Jamaica and Mohammed Raschid and Abbas Ali from Pakistan.

The significance of the Bristol Bus Boycott campaign

The campaign’s success did not mean that racial tensions, institutional racism and inequality ended on the buses or elsewhere in Bristol. Evidence suggests that the company may even have had a secret quota system still in operation. But it did help to pave the way for the UK’s crucial Race Relations Acts of 1965 and 1968. The Boycott has helped changed Bristol and the Britain forever. It shows us the difference ordinary people can make when they come together to take action against social injustice.

Migration is not something new. The flow of people joining and leaving Bristol has helped make our city what it is. From ancient Roman settlements to today’s Syrian resettlements, people have been making new homes beside the Avon for thousands of years. Many have also left Bristol, crossing vast oceans to seek fortune and freedom in faraway lands.

Compiled by Dr Madge Dresser with contributions from Ros Martin and Sue Giles.

Memoirs of a Black Englishman