The life of Henrietta Coppin

Henrietta Coppin was a Black woman who lived in Bristol in the 19th century. She worked as a dressmaker and her father and husbands all worked at sea. She lived mostly in the parish of St Michael’s, where other Black mariners (such as John Quaco) had settled for many years. Henrietta had some difficult experiences, which mean that her life is well documented in archival records and newspapers.

Henrietta was the daughter of Hannah and Peter Hooper. She was baptised in Coventry on 16 September 1810. It seems the family moved to Bristol soon after this, because Hannah died here in 1812. Peter met a new partner, Ann, and they had a son called John in 1818.

We first found Henrietta in records in Bristol when she was married in 1830, aged 19. Her marriage records shows that she’d had enough education to write her own name, though her husband had not.

Her husband was Richard Bowen and their wedding was at St John the Baptist church in Bedminster. Their son, Alfred Hooper Bowen, was baptised in 1833. As Alfred doesn’t appear in later records, it is likely that he died very young.

By 1841, Henrietta and Richard lived at Bristol Steps, in St Michael’s. It seems that Richard died around that time but Henrietta stayed at this address for many years. She took in many lodgers for extra income, including other sailors and her brother John.

Henrietta remarried in 1842. Her new husband was Richard Esdale, a Black mariner from the West Indies. 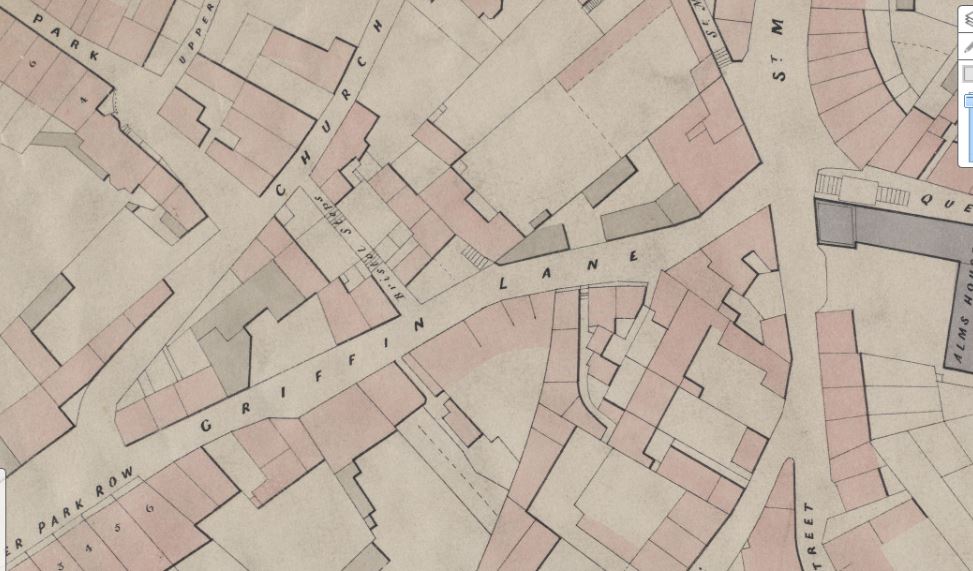 Map showing the location of Bristol Steps, between Church Lane and Griffin Lane. It now longer exists but these streets are now Perry Road and Lower Park Row (from the 1855 Ashmead map on Know Your Place) 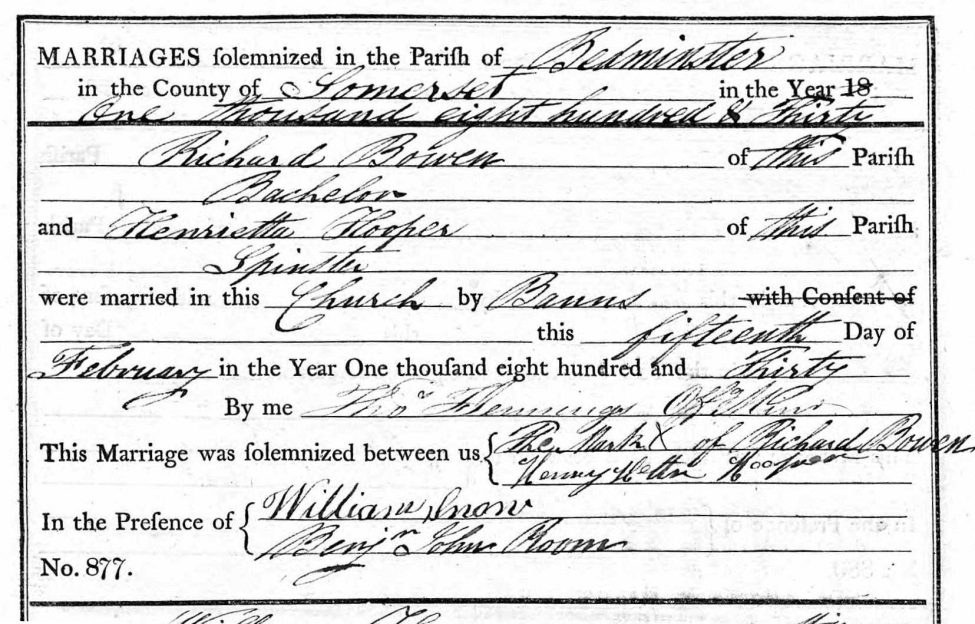 Record of the marriage of Henrietta and Richard Bowen

Record of the marriage of Henrietta and Richard Esdale

We learned from a newspaper report that in July 1843, Henrietta was assaulted. She suffered a serious head injury and she was too ill to testify at her attacker’s trial.

It is likely that the attacker was one of her lodgers. According to the report, he ‘acknowledged that he did assault her when she came to demand some rent, not being able to command his temper because he had she spoke in an improper manner of his wife.’

The death of Richard Esdale

In April the following year, Henrietta faced the death of her second husband. Being a mariner was often dangerous and Richard was injured on a voyage to Granada and Nevis. He returned home to Henrietta but died in the days that followed.

An inquest examined whether his death was caused by neglect and abuse on the ship. The newspapers described his poor physical state and quoted witnesses who said that conditions on the vessel were unsafe.

Henrietta testified that Richard had described his captain as cruel. She described her husband coming home injured but said she hadn’t expected him to die. The inquest concluded that Richard had died from a brain injury. In their remarks, the jury condemned the captain for not providing proper care during his illness.

For some years, Henrietta continued to live at Bristol Steps. In 1856, she was joined by her third husband, William Francis Coppin. Records show that William was also a mariner from the West Indies and that Henrietta’s brother John was a witness at their wedding.

Image: Rate book showing Henrietta as the ratepayer at the home she rented on Bristol Steps, 1853

By 1861, Henrietta and William had moved to the Redcliffe area of Bristol. Henrietta was still working as a dressmaker and they shared their home at 14 Langton Street with John and other lodgers.

This is the last time we can find Henrietta in records in Bristol and she doesn’t appear in the 1871 census. It is possible that she died in Newport, South Wales, in 1870.

Sources used in our research

You can see records on Ancestry and the British Newspaper Archive via a paid subscription or access them free of charge at UK local libraries.

Inquest into the death of Richard Esdale:

Black people have lived in Bristol for over four centuries. We don’t know much about Black residents before the period when the city’s merchants began trading enslaved African people overseas in 1698. However, records at Bristol Archives and elsewhere show that Black people lived and worked here least a century before then.

Using archival records, we have explored the life of John Quaco. He was a Black man from Bristol who served on merchant ships. As a seaman, his career is documented in a range of records that tell us a little about his work. Other records give glimpses of his life in Bristol.