I’m lucky enough to be volunteering in the Biology Department of Bristol Museum & Art Gallery with Natural History Curator Bonnie Griffin, and I’ve already been part of an exciting discovery! Down in the depths of the stores, we came across an articulated skeleton with no tag.

We could tell it was a mammal by its anatomy and, as I learned from Bonnie, there was a way of telling if it was a member of the lemur family by looking at its teeth.

As seen here, their lower front teeth are comb-like. This is because lemurs use their teeth to groom themselves.

This kind of tooth structure isn’t seen in any other animal and so it’s a quickly identifiable trait.

The bones collected debris when the museum was bombed during the Bristol Blitz. It is important that this is removed to keep the bones in the best condition possible. All the specimens in the store have numbers identifying when they became part of the museum’s collection.

Searching carefully all over the specimen, we managed to see a faint number on the plinth the skeleton was attached to. From this number we were able to find out that it was a Black Lemur (Eulemur macaco).

This was very exciting and useful to know. It is now a valuable asset that can be used to further our scientific knowledge and gives the potential for anybody to get up close and learn about this vulnerable species.

Lemurs are only found in Madagascar – an island off the South East coast of Africa. Their home is under constant threat from deforestation from the local people who try to make a living from the wood. The fully articulated skeleton of the black lemur, Eulemur macaco, found in the store.

The black lemur lives in the northwest of Madagascar, off the coast of Mozambique, Africa. It is classified as vulnerable based on its known habitat range which is less than 12,000km2.

I have been volunteering as part of my degree in Integrated Wildlife Conservation run by UWE and Bristol Zoo. This lemur skeleton felt extra special as Bristol Zoo have a field station in the protected area of Ankarafa forest, North West of Madagascar.

They have a partnership with 30 other European zoos and are actively involved in field research and community based programmes to help the local people find sustainable ways of making a living whilst helping protect Madagascar’s lemurs.

Are you interested in volunteering with us? Then get in touch! 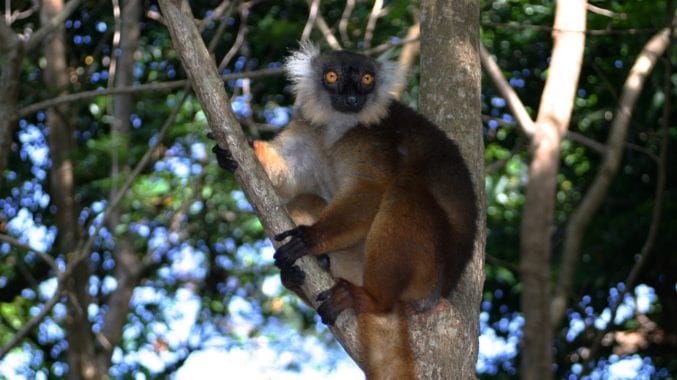