Joy Gerrard has been making images of mass protests since the massive anti-Iraq War demonstration in London in 2003. Her canvases show Occupy, the Arab Spring and Black Lives Matter demonstrations. Since 2016 she has focused on the anti-Trump and anti-Brexit marches.

I was new to Joy Gerrard. I was immediately struck by her arresting images. The imagery is familiar. Taken from aerial newspaper photographs, it reveals the huge scale of the demonstrations. Gerrard’s treatment defamiliarizes this trope.

She replaces the colour photography with funereal monochrome. Large flat black areas make ‘holes’ in the composition. Gerrard works with the canvas horizontal. This reflects the downward-looking perspective of her images. (And this shifts again once the painting is on the wall.)

It’s actually because she uses Japanese ink and it is too runny to work upright. The artist has chosen the ink for its dense blackness and she grinds the pigment blocks herself. 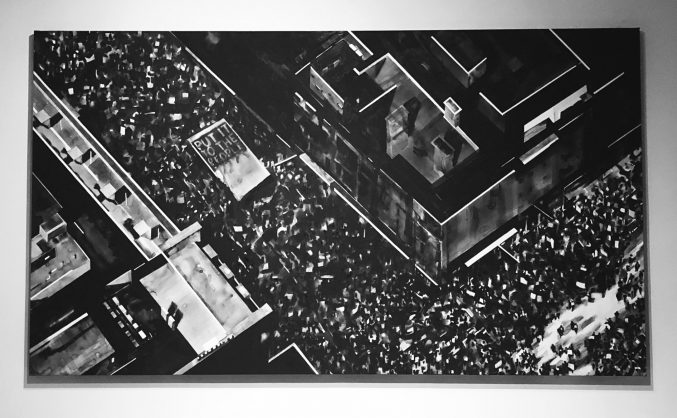 The large-scale canvases blur the individual figures into abstract marks. In this example, only the banner, ‘PUT IT TO THE PEOPLE’, helps us to see what we’re looking at. Gerrard is clear about the ambiguity within the anti-Brexit movement. She alludes to this in the movement of the crowd pulling in different directions.

Brexit will have an enduring effect for generations and it is one of the most divisive issues of our time. Are the marchers in Protest Crowd contained by the streets or have they claimed them?

I first encountered Barbara Walker at the Venice Biennale in 2017. She featured in the first Diaspora Pavilion, showing British artists of colour. She had drawn monumental figures of black soldiers in chalk on the walls of a palazzo stairwell.

I Was Here IV and V come from a series that she had been working on for seven years. The quest into the role of black soldiers in the Iraq and Afghanistan wars took Walker further back in time. She discovered the earlier history of African Caribbean soldiers in the First and Second World Wars.

Gerrard’s Protest drawings and paintings also began with the Iraq war. Like her, Walker uses archive material to make images in monochrome. Walker uses fragile, sometimes ephemeral mediums – chalk, embossing, tracing paper. They serve as a vehicle for the point she wants to make about the erasure of black histories. So she washes chalk drawings away from the gallery walls. Or, she reworks historic paintings with black sitters.

In a reversal of history, she blanks out the white figures. 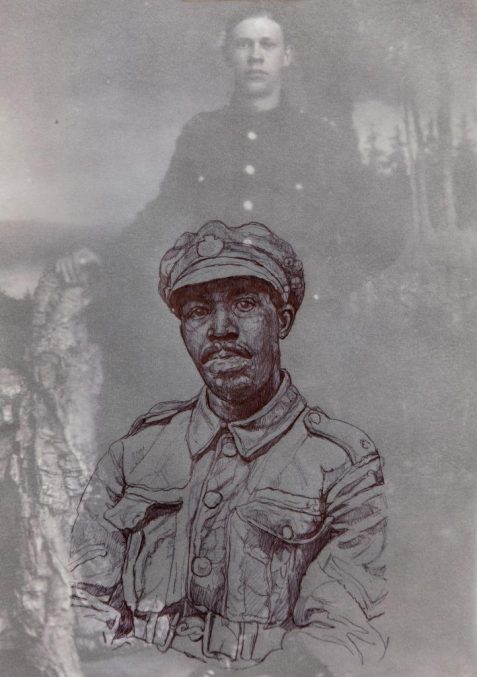 I Was There IV 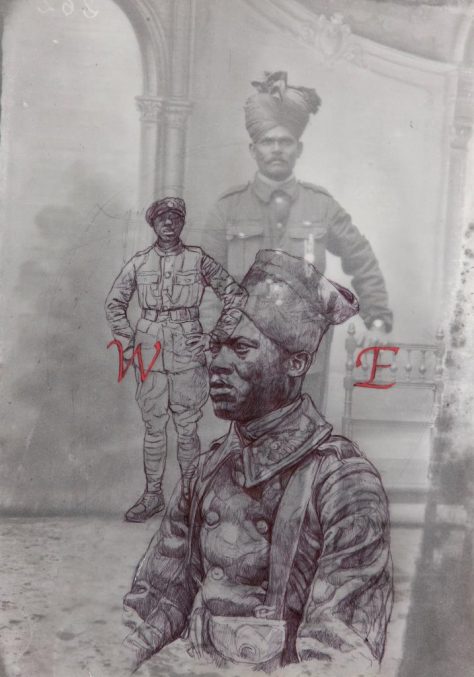 I Was There V

I Was Here IV and V are intimately-scaled ink drawings of black soliders. The drawings on tracing paper are overlaid onto digital prints of white and black and Asian soldiers.

The images come from public archives in the UK. Walker’s point is that they are anonymous. The only clue is the red letters W and E. These tell us that the soldiers came from the western and eastern parts of the former British Empire to fight the war of the colonial masters.

I Was Here V overlays two soldiers in one drawing. The process of overlaying drawings is a kind of palimpsest. It is Walker’s statement of presence. Vitally, it doesn’t erase the presence of the soldiers over whose images the drawings are placed.

The works were acquired through the Contemporary Art Society Acquisition scheme with the support of the Friends of Bristol Museums, Galleries & Archives. 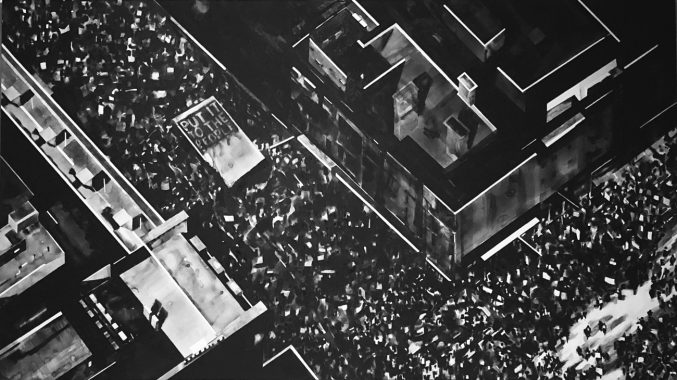