Since November 2019, I have been work-shadowing Kate Newnham (senior curator, visual art) at Bristol Museum & Art Gallery. Before lockdown, I was working with Kate to curate a small exhibition of Japanese hina dolls for the Eastern Art Gallery. 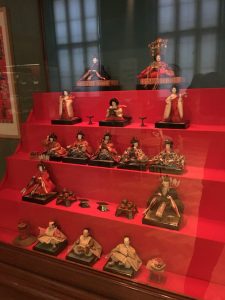 The 1920s dolls set on display in the Eastern Art Gallery. The dolls were given to the museum by Isobel Elliott in 1976.

The festival Hinamatsuri, also called Girls’ Day or Dolls Day, takes place in Japan on the 3 March. Families display a male and female doll to wish for the health, happiness, and good marriage of girls. Leaving dolls on display after the 4 March is considered bad luck and said to lead to the late marriage of girls in the family.

Historically, the date of the festival was held later in the year, on the third day of the third month according to the lunar calendar. This would have been around the time that peach blossoms typically flower, and the festival is still sometimes called momo no sekku, the Peach Blossom Festival. Peach remains symbolic to the festival despite the change in dates.

The male and female dolls are described as the Emperor and Empress of Japan, and displays typically represent a Heian period (794-1185) imperial wedding. Doll sets vary in size and in price. They can be as simple as folded paper or exquisitely handcrafted three-dimensional dolls.

More elaborate displays will include a multi-tiered stand of dolls that include ladies of the court, musicians, attendants, and an assortment of miniature furniture. Dolls are traditionally bought for a girl by her maternal grandparents. The number of tiers and dolls vary according to the family budget and the size of one’s home. 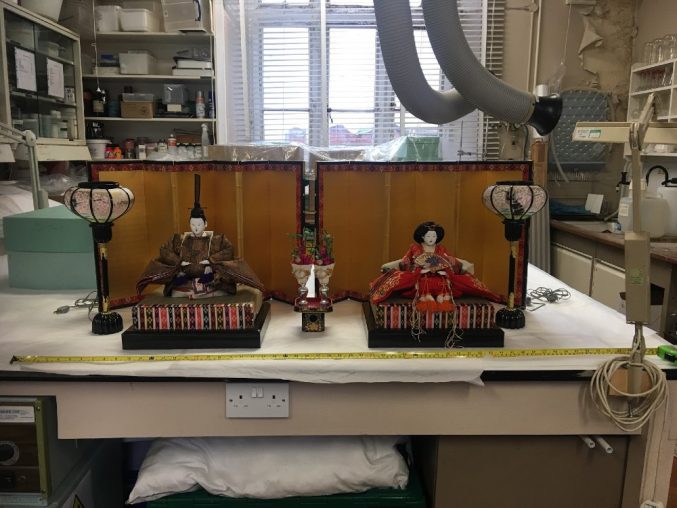 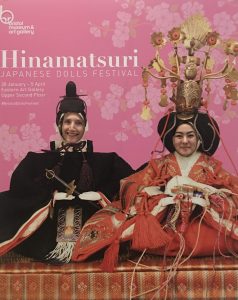 Bristol Museum & Art Gallery looks after five sets of hina dolls, dating from the 1870s to the 2010s. Seeing the sets together, it is interesting to observe the stylistic changes. Over 140 years, the size of the dolls increased up to the 1950s. This could be due to the lifting of an earlier Edo period (1603-1868) ban on showing wealth above one’s station. Since the 1950s, facial features have become more ‘western’ with later dolls exhibiting larger eyes and mouths.

It seems that few museums in England have hina dolls in their collections, or dolls as old as ours. This could be explained by a superstition in Japan, which says that whilst dolls should be treated with care, they should be disposed of when no longer required, for example by ritual burning at a temple or shrine. Although some hina sets get passed down as heirlooms, this superstition may explain why it is more common for families to buy new sets.

The 2020 exhibition showcased two sets from the museum. A large five-tiered 1950s set is on loan from Rosemary Bailey who was born in Japan and moved to the UK as a young child. Her Japanese family sent a set of dolls with her, bought by her aunt who worked at the Takashimaya Department store in Osaka. 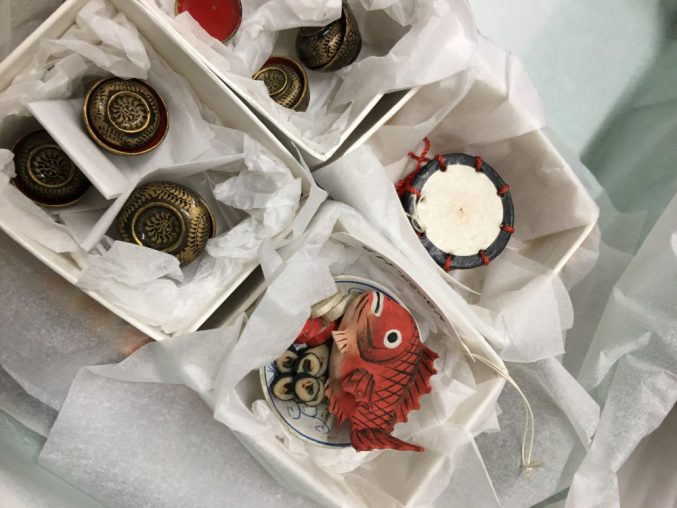 A miniature plate of sea bream and sushi, lacquered bowls, and a drum from the 1920s set

The second set, although it has six tiers, is much smaller in scale and dates to the 1920s. It was donated to the museum by Isobel Elliott in 1976. It features smaller dolls but has in addition an assortment of miniature, lacquered furniture representing the Emperor’s dowry. Among these intricately handcrafted items is a vanity set, a chest of drawers with workable hinges and components, a plate of sushi and sea bream, and a small tea ceremony set with a tiny bamboo whisk.

It is our hope that in coming years we can showcase the museum’s other sets.

The top tier seats the Emperor and Empress dolls on raised tatami mats on lacquered bases. Behind them is a pair of dazzling gold paper screens. Some sets will have lanterns made of paper or silk, and have a small table with two vases of flowers placed between the couple.

The second tier holds three court ladies who serve festive sake (rice wine) to the male and female dolls. Two of the dolls are standing and hold serving utensils, one with a long handle, the other with a short one. The third central doll holds a small table and maybe standing or sitting. Between the ladies are stands with round table tops atop which seasonal sweets are placed.

The third tier seats five male court musicians. There are two drummers, a flautist, and a singer who holds a fan.

The fifth tier holds three townsmen, who take care of the Emperor’s garden. They have varied facial expressions, expressing joy, anger and sorrow. There is an auspicious mandarin orange tree on the left and a cherry blossom tree on the right. This pairing of trees were popular in aristocratic gardens and can still be seen outside the Imperial Palace in Kyoto.

The sixth and seventh tiers hold a variety of lacquered miniature furniture representing the dowry of the Empress. The sixth platform hold items that are used within the palatial residence: a chest of drawers, sometimes with swinging outer covering doors, a nagamochi (long chest for storing kimono), a smaller clothing storage box, a mirror stand with a chest of drawers, a sewing kit and a set of utensils for the tea ceremony. The seventh platform hold items used away from the palatial residence: a set of nested food boxes, a palanquin in which a high-ranking person could be carried and an ox-drawn carriage.

With thanks to our sponsor InsideJapan and our donors John & Susan Hart and Simon Baker who have kindly supported this display. 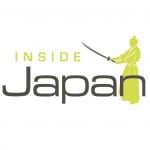