Read part one of this blog:
Wonderful Whale 33: The Discovery

You may find some of the images in this blog post upsetting.

This stranding of Whale 33 and over 100 of her pod in 1927 was hugely important for the scientific community at the time, not only confirming the existence of an ‘extinct’ species but also providing a huge number of whales for study and research. It also highlighted issues with the law of stranded whale ownership. Previously, ‘whales, when large, belong to the Sovereign; when small, to the captors’. A large whale was defined as ‘too large to be drawn to land by a wain pulled by six oxen’.

Whale 33’s stranding highlighted that the rules needed modernising. Now a small whale is defined as less than 25 ft, making these beached whales property of the finder [1].

Incredibly Martin Hinton examined, measured and took stomach contents of 143 whales, employing local men to strip the bones and pack them for transport. Two came as complete specimens, while the other 141 whales were boiled and cleaned down to skeletons. This was a herculean task, noted for its unpleasantness, with workers suffering ‘gastric disturbance’ and ‘poisoned fingers’ [2].

Once the whales had been processed, the museum had the job of finding homes for them. In the Proceedings for the British Museum, the whales were noted as ‘the most interesting acquisition of the year’ [3] and with over 140 specimens it’s no wonder that they had excellent examples to donate to other museums.

In fact, articulated skeletons of the whales are a highlight at the University of Reading’s Cole Museum, the University of Glasgow’s Huntarian Museum, National Museums Scotland and the Harvard Museum of Comparative Zoology.

Although the exact number of whales washed ashore is unclear, what is certain is that this astonishing event in which Whale 33 lost her life, had a huge impact both locally and internationally. One of her pod featured in a US newspaper when ‘the gift of an 18 ft false killer whale skeleton’ was presented to Harvard. The newspaper notes that the stranding represented the ‘first real source material for comprehensive study of this creature’ [4].

Closer to home, the December 1927 edition of The Children’s newspaper describes how the whales brought good fortune to the ‘prudent fishermen’ of Bonar Bridge, Dornoch Firth. Today, Whale 33 continues to bring good fortune to Bristol Museum & Art Gallery where her incredible story contributes to the unique value of our collection. In 2015 she was part of an international study, to discover more about the evolution of jawed animals by Bristol University PhD researcher JJ Hill.

In 2016 her huge skeleton has been photographed, digitised and databased, and her historical documents have been gathered for the museum’s archive. She has now been repackaged from the old tea crate into more suitable museum grade boxes. Her skull will be on display as part of a new exhibition in 2017; Pliosaurus! Dive into the Jurassic deep.

Despite her tragic death, whale 33 has certainly left an incredible legacy for the people of Bristol and beyond.

With thanks to John Barnes (History Links Museum) and Helen Sturge (Natural History Museum London) for use of images and text. And to the volunteer team: Bill Brind, Romilly Spears and Jade Jordan who helped move and pack the whale.

Read part one of this blog:
Wonderful Whale 33: The Discovery 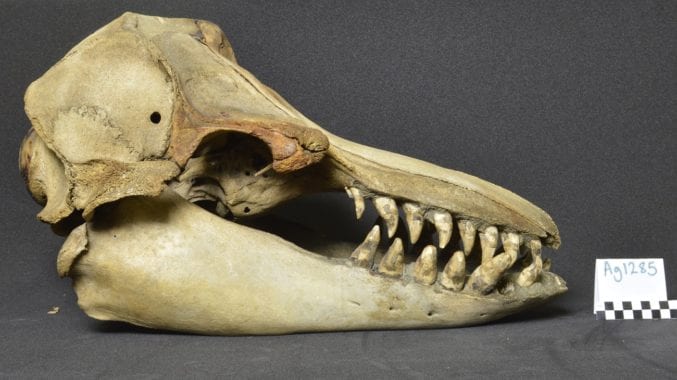